Westport and Lee is a cafe nestled into the winding curves of Paddington’s popular Latrobe Terrace, a little way up from the Paddington Antique Centre. We hadn’t had to go to that area for anything in particular for a while, so hadn’t actually known the cafe was there, until we were invited to come for a visit.

The Prussian slue sign spanning the front of the cafe, announcing that it is Westport & Lee, is quite easy to spot from across the road, but if you are walking along on the same side of the street, it might be the A-frame signs suggesting you try their waffles or coffee that stop you.

Going through the entrance, you will find yourself in a space that has warm wooden floors, high ceilings, and light walls decorated with paintings by local artists (available for purchase). The mosaic tiles that cover the service counter are reminiscent of a Moroccan design, and are eye-catching without being garish.

We were greeted by one of the owners, and invited to wander the place a little, and find a seat. We had been in this building once before, in its former incarnation as Chocolate Orange, and not known that there was more than what you saw on that entrance floor. We were shown down the staircase, lined with black and white photos and ornate birdcages suspended like they were lanterns, to find ourselves in another area that looked quite different from the level above.

Where there had been dark tables and chairs upstairs, acting as crisp contrast to the colours of the rest of the room, here the colours were a gentler white and turquoise. This gave it a different feel, like a classic country teahouse.

Going through the doors of that room, we came to the outdoor area. There is a banner at the front of the cafe that announces that their deck is open. It was easy to see why they wanted to let people know about it. It is certainly not something you would even suspect was there from the entrance level. The deck cascades down the slope in multiple terraced levels. With its green outlook through the trees, it is an oasis that feels a million miles away from the rush of the city. It was a lovely spot to be on an autumn afternoon. The air was cool, but we were warmed by dappled sun coming through the leaves and large shading umbrellas overhead. The swish of the trees as the breeze blew through added to the tranquil atmosphere. We were told that they have blankets in case patrons get too cold outside, and that there are also fairy lights that they turn on for events at night.

We were brought the menu, recently updated with some new additions, and given time to look through the options. There are breakfast items, and lunch ones available from 11am. On the list were breakfast/brunch staples like eggs benedict, an avocado toast dish, and a big breakfast. We were immediately drawn though, to the Canadian Waffles and the Shak Eggs.

Coffees arrived first. The flat white had a good microfoam texture, and a slightly nutty flavour.

The soy iced latte was nicely chilled. It had no bitterness, and even had a faint sweetness, with caramel notes. Like the flat white, it too was accompanied by a freckle.

The Shak Eggs, or shakshuka eggs, were listed on the menu as having tomato, kidney beans, mild spices, soft cooked egg, toasted turkish, coriander, and crumbled feta. It certainly looked vibrant in the dish when brought out, the coriander and feta standing out against the red sauce, and the golden yolk of the egg just poking out from the centre. The yolk had to be broken first, of course, and it was as runny as its appearance suggested. It cooked a little more as mixed with the other components in the hot dish. The sauce was thick and tomatoey, with a little spice kick to it (not too strong, as the menu assured, for those who can’t handle too much fire), and tangy tartness. Fresh tomato diced in added to the flavour and texture. The kidney beans made the dish more filling. The crumbled feta gave the dish creaminess, and was a counter to the acidity of the tomato base. The stack of turkish bread pieces that accompanied it was nicely toasted, so that the bread was crunchy on the outside, but retained a good chewy texture on the inside.

The Canadian Waffles were listed as coming with scrambled eggs, crispy bacon, and Canadian maple syrup. They too were prettily presented, components arranged neatly around the pouring dish of maple syrup, and waffles garnished with a sliced strawberry. The waffles, the star of the dish, were Belgian Liege waffles, caramelised and crunchy on the outside, and soft with a little chew on the inside. The bacon rashers were indeed crispy, and had a pleasant smokiness and saltiness that didn’t overpower the other flavours or make you immediately reach for water. The scrambled eggs had a soft and smooth texture, almost tofu-like. The syrup being served in a separate pot meant that you could decide how sweet you wanted each mouthful, allowing both those who want everything soaked in syrup and those who want just a little sweetness to have their way. It also avoids the issue of soggy waffles, although if they end up that way because you drown them in syrup, well, that’s your own fault. The only niggle we found with this dish was that if you are also a person who composes each bite with a bit of each component, towards the end we ran out of the scrambled egg, and just the waffle and bacon could be a touch dry, although a bit of syrup helped. Sweet and salty is a combination that people are just wired to want, and this is a good way to get a fix.

Curious about the origins of the name, we asked about its quite American-sounding source. We discovered that it is almost like a cryptic crossword puzzle. As one of the owners explained, it references Thomas Lee, who designed the Adirondack chair, and Westport, where it was first created. The Adirondack chair represents the essence of what the mother and daughter team who own and run Westport and Lee want it to be: comfortable and stylish without being pretentious.

We certainly felt welcome there, but being invited guests aside, we also noticed many other patrons settling at various tables, both inside and outdoors, enjoying food and either conversation with company, or the company of a book. The layout offers a setting to suit most fancies, and other patrons were attended to with similar warmth.

Westport and Lee is a great find in Paddington, and worth a visit if you need some respite from the urban rush.

Value: Not cheap, but alright. 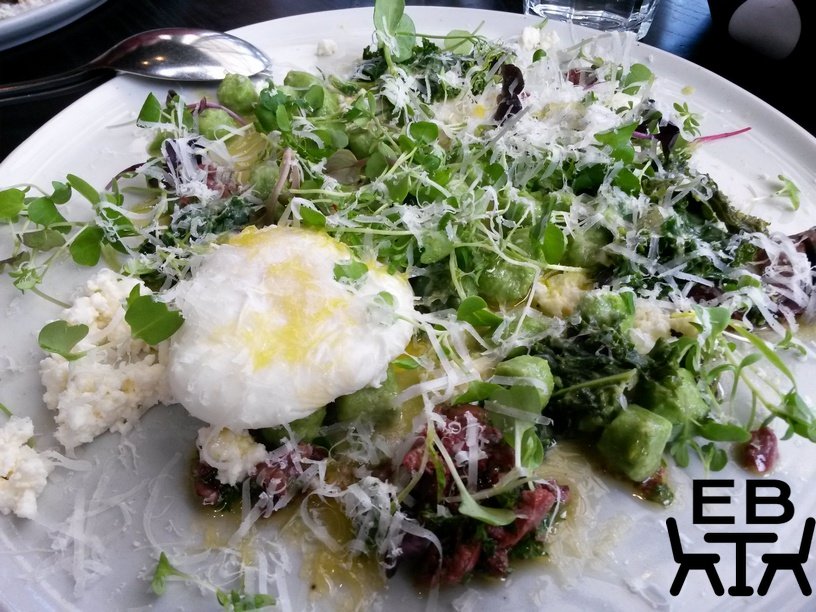