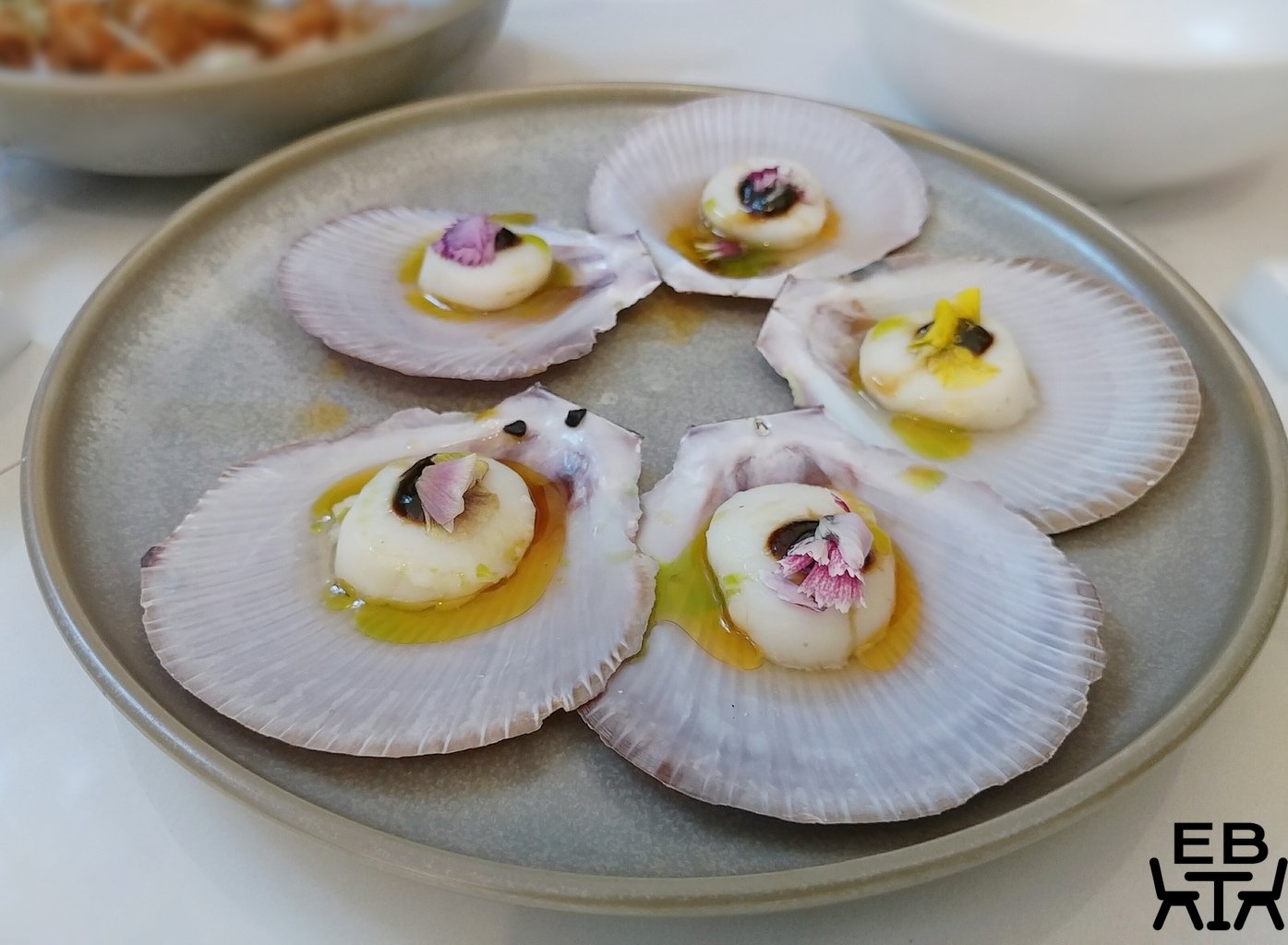 In the Chinese Lunar New Year spirit, we decided to check out the CBD’s Donna Chang for a group gathering. Word was that it was a modern chinese restaurant that did fine dining.

It is located on the ground floor of the Adina Hotel, a building which the Queensland Government Savings Bank once occupied. As we approached the building, we came to two doors. A sign indicated that patrons wanting to go to Donna Chang should use the doors on the left, and that the Adina Hotel itself was closed for emergency repairs.

We went through the doors, and found ourselves in a large space with the ceiling a couple of stories overhead. The ceilings had ornamented plaster moulding and pendant chandeliers descending from it. Plenty of natural light streamed through the large windows. A staircase near the reception counter led up to the private dining rooms upstairs. Light pink spherical paper lanterns dotted the space, probably meant as additional decoration for the lunar new year rather than a permanent fixture, but they were a little underwhelming, sparse in the space, more like a whimsical afterthought than truly festive.

The furnishings were definitely more Western than traditional chinese style, with square white marble-topped tables and padded chairs in light pink and light grey-blue. There were also semicircular padded booths done up in plush pink, that reminded one of the shell in the Birth of Venus because of the vertically sectioned seat backs.

As we made our way to the table, we walked past the semi-open kitchen, with roasted ducks and suckling pigs hanging in the window, as you might see at Burlington BBQ restaurant. There were also fish tanks with live fish, not as an aquarium display, but, as you might commonly find in chinese restaurants that served seafood, a demonstration of how fresh your food would be.

The menus came in bound light grey-blue folders, in a similar hue to some of the chairs. In them were food items across a couple of sheets, in sections of raw starters, small dishes, bao, steamed items, baked or fried items, noodles, larger dishes, live seafood (hence the tanks), and sides. There are more options at dinner, including banquet menus, but these were not available at lunchtime. There was also a separate drink menu with many a tipple, for those who do drink alcohol. They had a selection of a few different types of teas for those who don’t drink alcohol, but no other interesting non-alcoholic drink options.

We chose a number of items to share from the menu. It is worth noting that the waitstaff did check if we had any dietary requirements in our group, and were happy to make suggestions to accommodate those. For starters, we chose the Steamed scallops with black bean and chilli, Fried calamari with pepperberry, garlic, and lemon, and Typhoon shelter style fried school prawns. For a more filling meal (one needs some carbs), we ordered the Crispy egg noodles chow mein with sweet pork and pickle relish, and the BBQ pork and prawn fried rice. We also had the Twice cooked duck with pancakes, cucumber, spring onion, and hoisin, and the Roasted pork belly with coriander and chilli. They were happy to alter the portion sizes to fit our group.

The Steamed scallops with black bean and chilli were prettily presented in their shells, radially arranged on the plate, the edible flowers placed upon them giving them a bright pop of colour. The scallops were nicely cooked, and still tender. The black bean sauce on top was a savoury and slightly sweet flavour that complimented the scallops, without too much chilli heat.

The Fried calamari with pepperberry, garlic, and lemon was a less decorated dish. The fried calamari were a tidy heap on the plate, on a bed of crumb that was also piled on top of it. A wedge of lemon and pepperberry leaves accompanied them. The calamari were springy and coated with batter that, though not quite crunchy, was at least light and not stodgy. The crunch from the dish came from that crumb, which was salty, a little garlicky, and lightly spicy. Eaten together, it delivered the flavour and texture sought, essentially salt and pepper calamari.

We weren’t quite sure what the Typhoon shelter style fried school prawns were going to look like. As it turned out, they weren’t served in some sort of elaborate nest or bunker, but, similarly to the Fried calamari dish, with the fried school prawns in a pile, topped with a crumb. Reading around, “typhoon shelter style” refers to a cooking style in Hong Kong, in which they use fried garlic, scallion, black beans, and chilli. The prawns were actually a reasonable size, with some meat to them, unlike other school prawns we had had elsewhere, which seemed mostly shell. The flavourful crumb topping it was the aforementioned mix of fried garlic, scallion, black beans, and chilli. It had a moreish saltiness and a little spicy heat. What we thought as we were eating though, is that this really needed rice to go with it, rather than being a standalone dish.

Fortunately, the BBQ pork and prawn fried rice arrived at the table soon afterwards. The rice was nicely cooked, with the grains separated rather than clumpy, and not notably oily. It wasn’t particularly heavy on the BBQ pork or prawn though, with only the occasional bits in there, and spring onion slices in more notable abundance. That was pricey at $16 for the smaller size serving.

The Crispy egg noodle chow mein (a westernised twist of the hanyu pinyin of what should be “mien” for “noodle” – which then makes it Crispy egg noodle fried noodle) with sweet pork and pickle relish was served as a tall nest of noodles in a bowl, topped with the minced pork mix. The noodles had a cracker-like crunchiness. At many eateries, the dish is served with a more soupy sauce mix, so the noodles at the bottom sit in the sauce, and have a more typical soft noodle texture, so that when you eat, you have a mix of soft and crispy noodles. The drier minced pork mix in this instance meant that all the noodles stayed quite crispy. That was not a bad thing necessarily, just a different textural experience.

The Twice-cooked duck with pancakes, cucumber, spring onion, and hoisin sauce was, to all intents and purposes, served the way Peking duck pancakes are served, with the thin pancake skins presented in a steamer basket, the duck meat and greens on a separate plate, and the sauce in a little bowl, for patrons to assemble the rolls themselves. The pancake skins were thin and soft. The other components one placed and wrapped in the appropriate proportions to make each rolled serving. The duck meat was cooked alright, but what we missed was that snap of crispy skin you get in proper Peking duck pancakes. Perhaps we should have read the menu more closely, as it wasn’t listed as Peking duck pancakes after all, but the contents were all then a soft texture, and there wasn’t really a “wow” to the dish. It was just a wrap with sweetened (by the hoisin sauce) meat and greens. It is, of course, much easier to make twice cooked duck than Peking duck.

When ordering, we had deliberated between getting the Char siu sweet pork glazed with rockmelon honey and tamari, and the Roasted pork belly with coriander and chilli. We narrowly decided on the latter. The pork belly was served in slices that were thick enough that you could appreciate the crunch of the skin layer, but thin enough that you could bite through the meat without having to cut it any further. The fat layer had a gelatinous chew. What we did find though, was that it felt like it needed a sauce, as it was a bit dry if just eaten by itself as it was.

At the end of the meal, we were brought a plate of individually packaged fortune cookies, with “Donna Chang” printed on the packaging, so it was clearly specifically made for them. They were light and sweet, and had a good snap when broken open. In them weren’t your typical enigmatic fortunes or lottery numbers, but quotes from Seinfeld. Waitstaff explained the link to us, that Donna Chang, who the eatery is named for, is a character from a Seinfeld episode.

Overall, Donna Chang was an alright dining experience. The old banking area has been restored well, and you can see it as a pretty event space. The waitstaff were professional and had good attention to detail. The food though, didn’t really impress. It was pretty typical for chinese cuisine, and didn’t seem that different from many other meals we had had at other more casual chinese eateries, at a significantly lower price. It was hard to see it as “fine dining”. Having been to Little Valley not long before we visited Donna Chang, it was hard to avoid making comparisons. Given the choice between the two at a similar price point, we would pick Little Valley to return to.