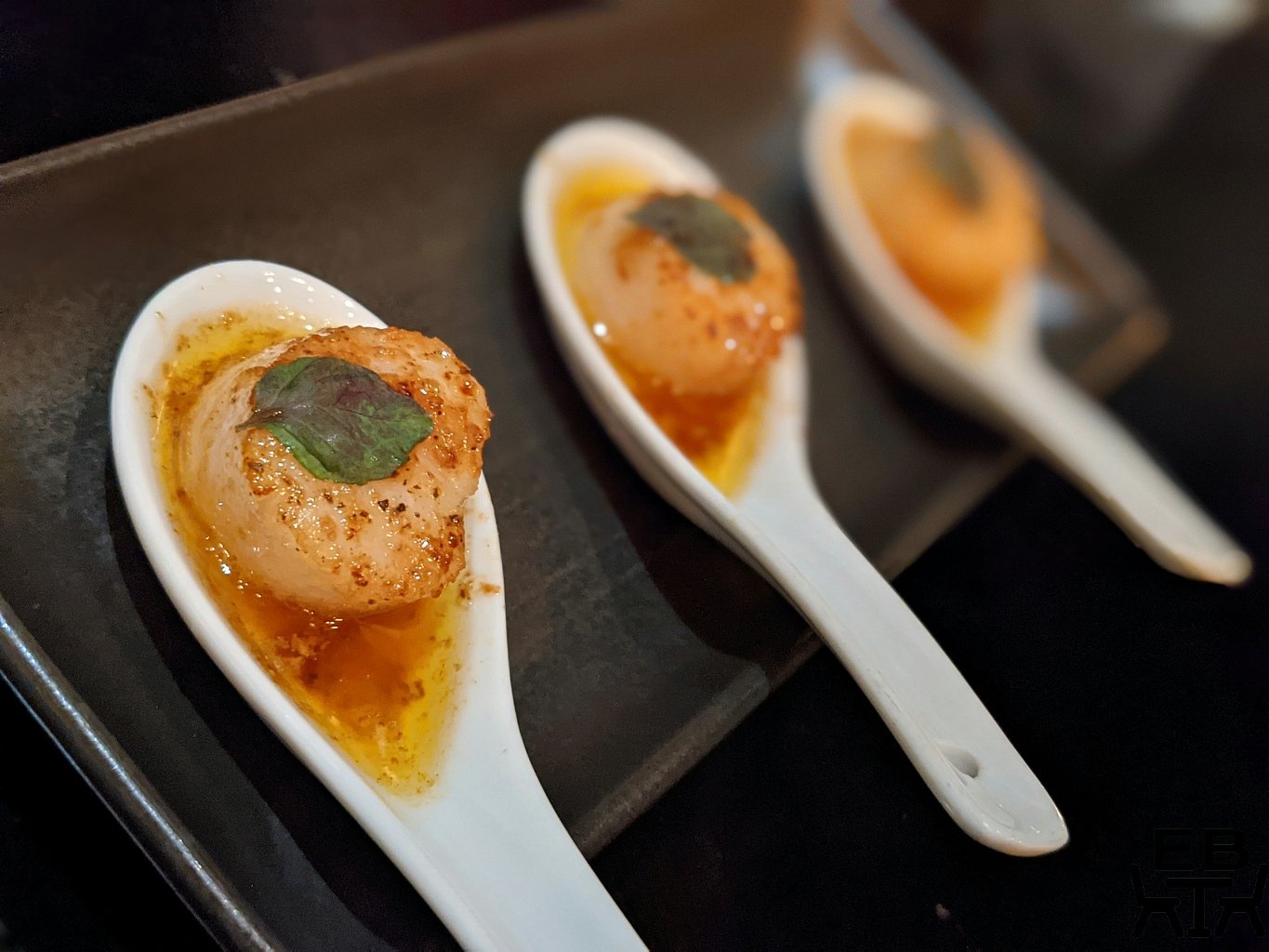 We were aware that The Golden Pig was a cooking school, event venue, and restaurant, but had somehow never actually been there. It came to mind when we were looking for a place to dine that had potential for delicious food, and non-boring vegetarian options (like good foodies, we scouted menus beforehand). As we planned to have dinner there on a weekend evening, we booked ahead to avoid being disappointed.

Located down a back street of Newstead, amongst industrial buildings and behind the Bunnings building, it is certainly not where you would expect a well-regarded eatery to be. The light glowing from between the metal-barred windows stood out against the darkness and indicated that there was some activity going on behind those brick walls, but if you did not know what was there, you might just as well mistake it for a hive of nefarious doings.

We found the entrance though (actually the side door, as it turned out), and were greeted by staff. After confirming our booking, we were shown to our table. On the way there, we walked past the open kitchen, with a cheery mural of said Golden Pig frolicking amidst a bed of flowers.

The interior retains that industrial vibe, with polished concrete floors, and white-painted brick walls. Potted plants on the ground and hanging from above soften the look, and our table was next to quite an impressive shelf of plants, essentially making a green wall.

A large door was open to the cool night outside, and the waitstaff did warn us that there were midges about. Helpfully, cans of tropical strength insect repellant were scattered about for diners to use. There were also citronella candles at the threshold of the doorway, but those intermittently sputtered and smoked out, acting a bit more as people repellants.

There were a few menus placed ready on the table, one with a list of the dishes available, divided into sections of Small bites, Medium bites, Large bites, Sides, and Dessert. After poring through the many options, the sheet with a list of banquets was determined to provide the easier choices. They have a standard banquet, a vegetarian/vegan banquet, or a coeliac banquet, each with a series of 10 dishes (we didn’t count rice as a separate dish). We ordered 3 standard banquets and 1 vegetarian banquet for our group.

The first item presented was Ma Hor, descibed in the menu as sticky fried peanuts and coconut with fresh pineapple. These were plated like amuse bouches, neatly lined up on the rectangular plate. The easiest way to eat them was to pick up the pineapple slices and their toppings with your fingers. They were better had in one mouthful than attempting to bite and divide the sticky peanut mix. This version did not contain pork, but still had a good mix of sweet and salty flavours, and a little chilli hit. There was also some seafoody depth in the background, which we would have guessed was from fish sauce, but they may have used another component to keep it vegetarian-friendly.

Following this was Scallops with miso butter and perilla for the standard banquet, and Eggplant with miso butter and perilla for the vegetarian banquet. Like a fine dining entree, each serve was daintily placed in a spoon, which kept the scallops and eggplant in a pool of sauce. What we thought was clever was how similar the standard and vegetarian dishes were made to look (sorry, didn’t take comparison photos). The scallops were perfectly cooked and tender. The miso butter sauce was a little savoury and umami, and flavoured the scallops well without overpowering their natural flavour. This was one of our favourite dishes of the evening.

The next dish for the standard banquet was Lamb cutlets with lemon chutney and minted yoghurt, and Crispy sichuan salt and pepper tofu with green chilli and shallot salsa for the vegetarian banquet. The lamb cutlets had a fried batter coat. Beneath the crunchy batter, the meat was well-cooked. By themselves, the lamb cutlets didn’t really carry the same hit of flavour as the other dishes though, and relied on the sweet relish and yoghurt raita to lift them. This was probably our least favourite dish of the banquet.

The following dishes were brought out together, and set on the table to be shared, as is typical for communal dining.

For the standard banquet, there was Braised Chinese red rice pork belly, with red dates and ginger. This was served in a clay pot, the meat certainly tinted red, but not that bright, candy-red hue of sweet and sour pork. The pork was pull-apart tender, and not too sweet.

Also on the standard banquet was Baked barramundi with chilli, coriander and lime. The barramundi fillets were heaped with sauce. The fish was perfectly cooked, and not dry at all. The firm flesh was lightly flavoured by the sauce, as well as hints of ginger and garlic.

The standard banquet also had Sweet and spicy Korean fried chicken with peanuts. The chicken was tender, and the batter coating it light and airy, more like you get on the fish from some fish and chip shops. The coating was sticky and sweet, with a present heat that was not too fiery.

The vegetarian banquet also had a South Indian vegetable curry with coconut, lime and curry leaves, and spiced house made paneer (or tofu). This creamy curry had great depth of flavour, with richness and complexity. It deftly balanced sweet, salty, earthy, and spice notes, without being fiery. This was a winning dish.

Common to the standard and vegetarian banquets was the Javanese vegetable salad with chilli and candlenut dressing. While an uncommon ingredient here, candlenuts are frequently used in Malaysian and Indonesian cooking. This fresh salad had a light lime and herb tang, with a little extra heartiness from the ground up candlenut.

The dishes were served with jasmine rice, in a large share bowl we could dole it out from.

To finish up for dessert, the standard banquet had Coconut mousse with turmeric and ginger poached pear, and peanut and coconut brittle. Although the vegetarian banquet listed a different dessert (Poached turmeric and ginger pear with cashew cream and cashew praline), we all received the same at the table. These were presented in clear glasses, so you could see the layers of components. The chef’s trick of plating up in a glass also meant that they did not have to worry about components being able to set and hold form independently, although the coconut mousse seemed set enough to be able to do so. It was smooth and light. The mousse was not in itself particularly sweetened, but the poached pear gave the mix sweetness, without being too cloying. The peanut brittle added crunch. All together, it was a dessert that was not terribly complex, but worked well.

The waitstaff at The Golden Pig were professional, but also friendly and welcoming. They introduced each dish, and could tell us some details about the food.

On the whole, our dining experience at The Golden Pig was better than many of our others at those professing to offer Modern Asian or Pan-Asian cuisine that aren’t in Sunnybank. We found the banquets a good way to try a range of their dishes, which span a wider array of cuisines than many similar restaurants offer. There was more nuance than sugar, fish sauce, and chilli. It was also notable that they have carefully considered their vegetarian menu, and have put in the effort so that it stands up well against the non-vegetarian dishes. The Golden Pig is definitely worth visiting, and they also offer cooking classes, for those who would like to learn some of their culinary skills. 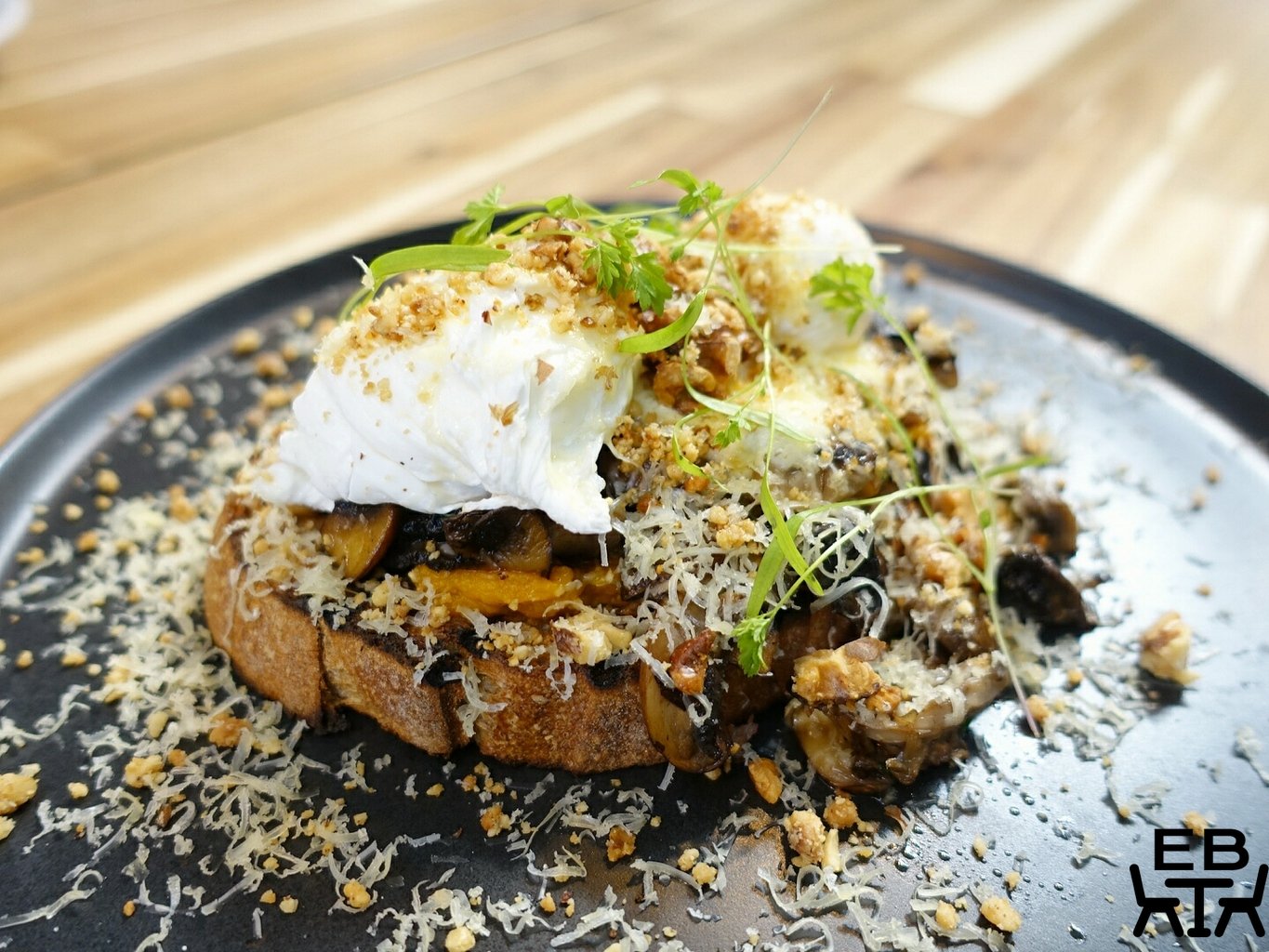