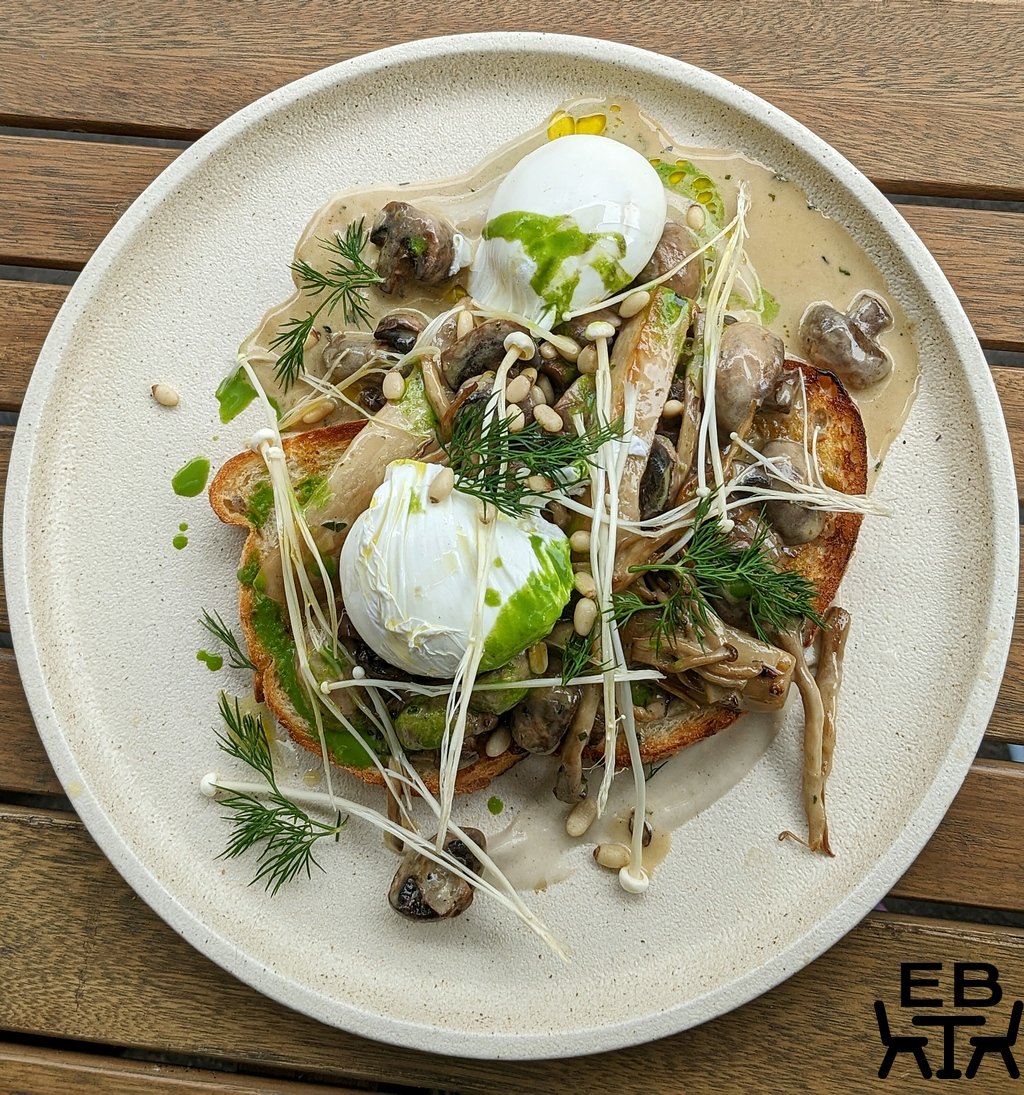 Scandinavian isn’t a particularly common cuisine in these parts, so Oppen caught our eye as a place to try. Located just off the popular Chapel Street, and near the Windsor train station, it is quite easy to get to, if you know where to find it. It is a little tucked away in a corner, which means that it is far away from traffic to be a chilled out leafy space, even on a weekend afternoon.

The signage is a bit subtle, so it helps to know what you are looking for. The round white sign with “Oppen” on it was just about camouflaged against the ceiling. The tables outside gave us the needed clue that it was there though.

Just through the entrance is a sign to let would-be diners know to wait there for staff to attend, which they did, quite promptly. They offered the option of sitting inside or outside. We chose outside, as it was a pleasant day, and the more COVID-safe option.

The interior looked to be a pretty space though, with earth hues of sandy blush walls and weathered wood tabletops. There were also semi-circular feature uplights along the wall as points of interest. It had a hygge feel to it, in contrast to the minimalist and industrial styles more commonly used in many eateries.

The menu was on a single laminated sheet, with food on one side and drinks on the other. They had sections of all day breakfast options, lunch options, and open sandwiches on housemade dark rye. The open sandwiches were in keeping with what one would associate as Scandinavian fare, but most other options, apart from the Scandi Board, seemed more middle-of-the-road. And, in keeping with many other places now, there is a 10% weekend surcharge.

We ended up picking the Ham Hock Benedict and the Mushroom Medley, and little caffeine to start.

The Vietnamese iced coffee was not bad, but was more like a normal espresso with some condensed milk, rather than having the flavour profile of a proper Vietnamese coffee.

The Spicy chai latte was sweet, with cinnamon notes, but didn’t really have present spice. It was predominantly just sweet.

The Ham Hock Benedict was listed in the menu as having braised ham hock, wok-tossed vegetables, potato rosti, pickled red onion, spinach sauce, poached eggs, and paprika hollandaise. It was presented with the poached eggs robed in the hollandaise, sitting atop the nest of vegetables and ham hock, and the block of rosti on the other side, with the spinach sauce a colour-contrasting decorative splash on the plate. The vegetables, largely a mix of shredded cabbage and carrot, were soft, like an okonomiyaki filling. Rather than being a single solid portion, the ham hock was served as small pieces mixed in with the vegetables. It was quite a tasty mix when had all together. The rosti was a long, oblong brick. Being that shape gave it a good ratio of crisp outside to softer inside. It was just mildly seasoned though, and really needed more salt for flavour. The proportion of vegetable mix to rosti also meant that if you were having bits of each together, you quickly ran out of rosti, unfortunately. Another rosti would have evened it up. The hollandaise was slightly tangy, with some heat to it, and the sauce helped to tie the other components together.

The Mushroom Medley was listed as having King oyster, shimeji, and enoki mushrooms, garlic creme, Jerusalem artichoke, pine nuts, poached eggs, and sourdough. The way this dish was plated actually had a Nordic feel to it, with the buff-coloured creme sauce making a pool around the other components, and the dill fronds laid over the mushrooms resembling ferns against a forest floor. The garlic creme had plenty of garlicky umami to it. The sourdough toast slices were thick enough wedges that the centre was saturated with sauce, but the edges remained crunchy. The assortment of mushrooms had slightly different textures, adding some variety to the eating. The pinenuts offered a denser bite and nuttiness. The dill, besides being decorative, added a herbaceous note.

Overall, the food at Oppen wasn’t quite what we were expecting, with the dishes being less distinctly Scandinavian than we thought they would be. (They were a bit more so at Brisbane’s Lokal and Co, and much more so at the ever impressive Elska.) The food was quite tasty though, even taking into account the things we wished were different. It was also a pleasant place to just be. Worth a stop for a relaxing meal.