The grand opening had been on the 8th of May, so it was still very new when we visited. Located in the Windsor Home Zone complex, there was plenty of parking, apart from dodging the many other people also there at the complex to run other errands on a weekend. The shop is easy to locate, near the entrance to the complex as you turn in from Newmarket Road. It is well-signed, with “P’Nut Street Noodles” in red lettering at the front of the store, and a large format picture of a busy street hawker scene on one of the side walls, with their logo of a happy face eating noodles with chopsticks overlaid on that in red neon.

The menus are displayed on screens above the service counter, divided into sections of their Most Popular Street Food, Signature Street Food, Street Salads, and Snacks. The menu is also available at the counter in a pocket-size folded sheet that you can take away to peruse. This also relates the story behind P’Nut Street Noodles, of how Chef P’Nut (the namesake of the eateries) learned to cook from his grandmother in Thailand to begin with, then other street stalls and restaurants, before starting up P’Nut Street Noodles in Australia. To the side of the service counter are framed photographs in sepia monochrome, of presumably a young P’Nut and his grandmother.

On the menu is an assortment of mostly noodle dishes covering a variety of South East Asian cuisines, for instance Penang Satay Noodles, Bangkok Noodles, and Korean BBQ Noodles. Prices vary a little depending on the main ingredient you choose to have, and these range from meat-free options like Vegetables or Tofu, to Chicken, Beef, Prawn, or Seafood. As we pondered our options, waitstaff helpfully advised us that the most popular dishes were the Pad Thai and the Cashew Nut Noodles. We ended up picking the Pad Thai, and Mee Goreng. They do also have a list of snack items, and the Mixed Platter gets you a sampling of most of them (which we had to have).

Patrons order and pay at the counter, and are then given a table marker, which is a small license plate with the P’Nut Street Noodles logo on it and a number on a stand, to take back to a table of their choosing.

The seating is mostly in a covered outdoor area, with fans above for if it gets too hot. It has more of a food court than a real hawker feel, being tidier and cleaner. Wood-topped tables that fit two are put together in configurations to fit either two or larger groups. With them are wooden stools embossed with words in different languages, saying things like “lucky seat” and “important person’s chair” when translated. It is a bit of cheeky fun. At the tables are a wooden box of condiments, like soy sauce, their house-made siracha, vinegar with fresh cut chilli in it, and chilli flakes. A tag on the box explains the condiments, and their importance and use. There are also tins with chopsticks in them at the tables, but they will provide forks for those who can’t manage their food with just chopsticks.

Pop music like Justin Timberlake and Destiny’s Child played over the speakers, but at not too loud a volume. The clatter of a ladle against a wok intermittently rang out from the kitchen, and smells of cooking ginger and garlic wafted out. It was certainly reminiscent of being at a hawker’s.

The Mixed Platter of snacks was first to be brought to the table. It was comprised of two pieces of chilli squid, two pieces of lemongrass chicken cakes, a spring roll, a stack of tofu puffs, and some prawn crackers. There were also a wedge of lime on the side, and a couple of containers of dipping sauces, one a siracha mayonnaise, which normally accompanies the chilli squid and the lemongrass chicken cakes if bought as separate snacks, and one a chilli jam sauce that usually goes with the spring rolls.

The chilli squid was nicely batter coated, a layer that provided a good crunch, without being overly thick, and not oily. The squid inside the coating was tender. It was lightly spicy, and seasoned enough to be tasty, even without the siracha mayonnaise. That chilli mayonnaise, incidentally, certainly packed a fiery punch, more so than was expected.

The lemongrass chicken cakes were actually made with chicken meat instead of just being a processed lump. There was a distinctly different texture from what you get with, say, a chicken nugget. The fibres of the meat could actually be seen when you broke into the cake. You could also see the bits of lemongrass and other herbs in it, that gave it its sweet fragrance. There was a fine, crunchy crumb on the outside, and the meat inside was not dry at all. We were told that only a certain number of the chicken cakes are made each day, and they do so to keep the food fresh and turning over.

The spring roll had a crisp outside pastry, then a chewier layer inside. The vegetable filling had satay flavours, and was a good balance of being moist but not soggy. (specific photos weren’t taken in this instance, because it looked..like a spring roll.)

The tofu puffs were golden cubes in a peanutty, more sweet than savoury, slightly spicy sauce. They had a denser, if not quite crisp, outside, and then a light, but not squishy, inside. They were quite different in texture from the silken tofu people may have more commonly encountered, or agadeshi tofu. One could eat plenty of these quite guiltlessly, as you could convince yourself that they are substantially really just air, and tofu is a health food..

The prawn crackers, one could also tell were made in-house and fresh. They were airy and had a good snapping crunch, without being oily. They were peppery, and had that fishy, seafoody flavour, without being too fishy.

The mains were brought out next, good heaped noodle serves on plates. The Seafood Pad Thai came with prawns, calamari, and mussels. On side of the plate, as one typically gets with this dish, was also a stack of chopped peanuts, and a pile of fresh bean sprouts. We do have to say that the bean sprouts were clean, white, and plump, and certainly looked fresher than those at most other places we have been to. The rice noodles were supple and slippery. The tamarind-based sauce was sweet, savoury, a bit spicy, and had a good wok char flavour. There was enough sauce to coat all the noodles, but not make the dish sloppy. There was a good amount of accompanying ingredients in the mix, including egg scrambled in, spring onion sections, and little fried tofu cubes. Of the seafood, there were three mussels, a couple of prawns, and calamari bits. We did note that the prawns had had their poop chutes removed, which was nice attention to detail. Some places cut corners and don’t, but it is certainly more pleasant to eat when it is done.

The Chicken Mee Goreng had hokkien noodles. While less saucy than the Pad Thai, it was still enough to coat all the noodles. The sauce was tomatoey, and had curry notes. It had less sweetness, despite the kecap manis, and more of a chilli kick. The fried garlic that garnished the dish added a nice roasty flavour. The chicken slices in the mix were still tender. Similarly, the stir fried vegetables were just cooked so that they still had freshness and bite, rather than being overcooked to a squishy texture. The scrambled egg filled it out a little more. More prawn crackers accompanied the dish, for a different, crunchy texture.

The wait staff were cheerful and helpful. We saw them explain the menu to a number of other customers who had questions as they looked through it.

Overall, we enjoyed the food we had at P’Nut Street Noodles. We could tell that care goes into the food they make, and it is tasty stuff. It certainly compares well with the popular South East Asian eateries in Sunnybank, and is quite reasonably priced, considering what you get. We can also assure you that Chef P’Nut is a real person, and not a made up character to market the food, having met him in person. And he can certainly cook. 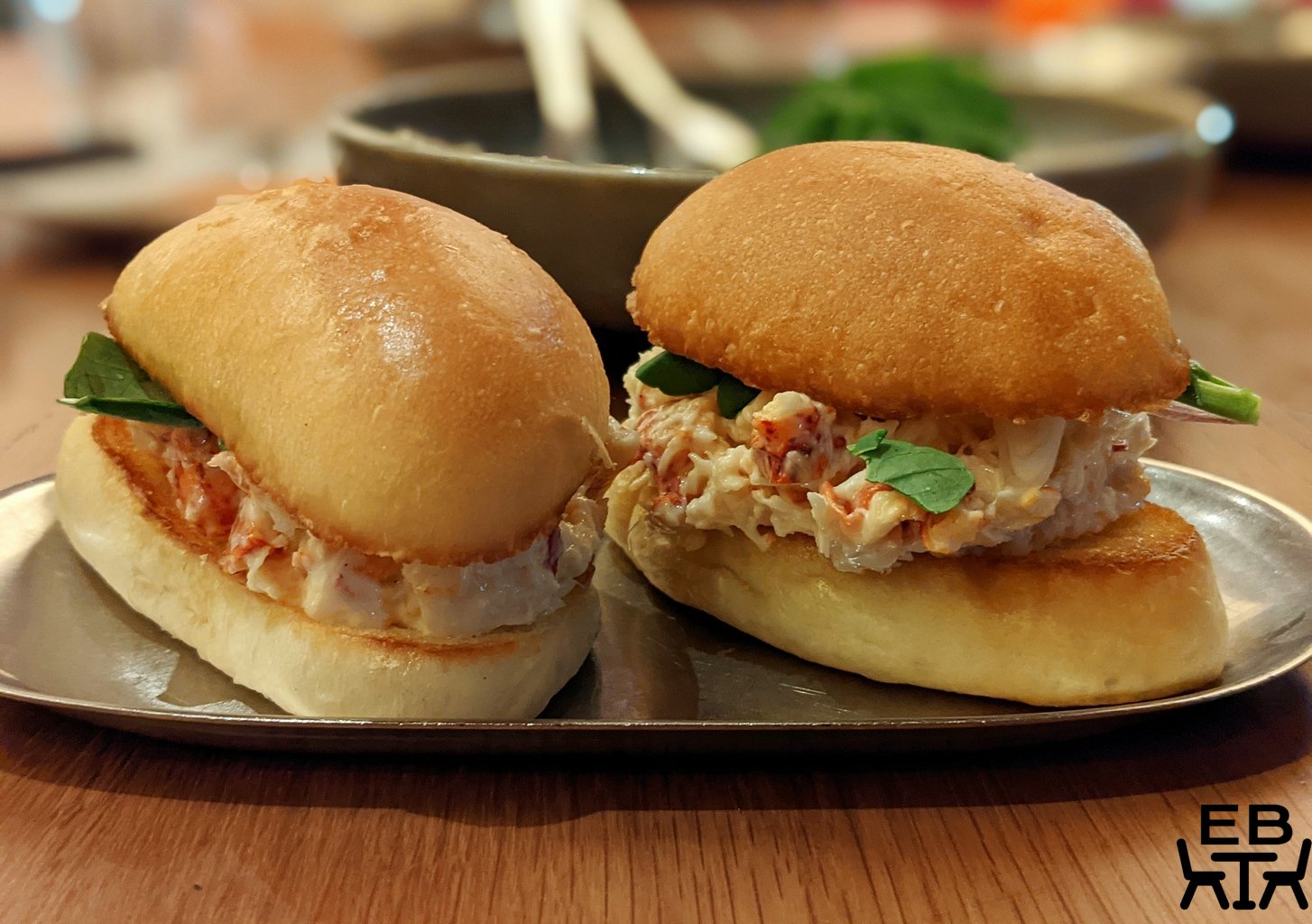